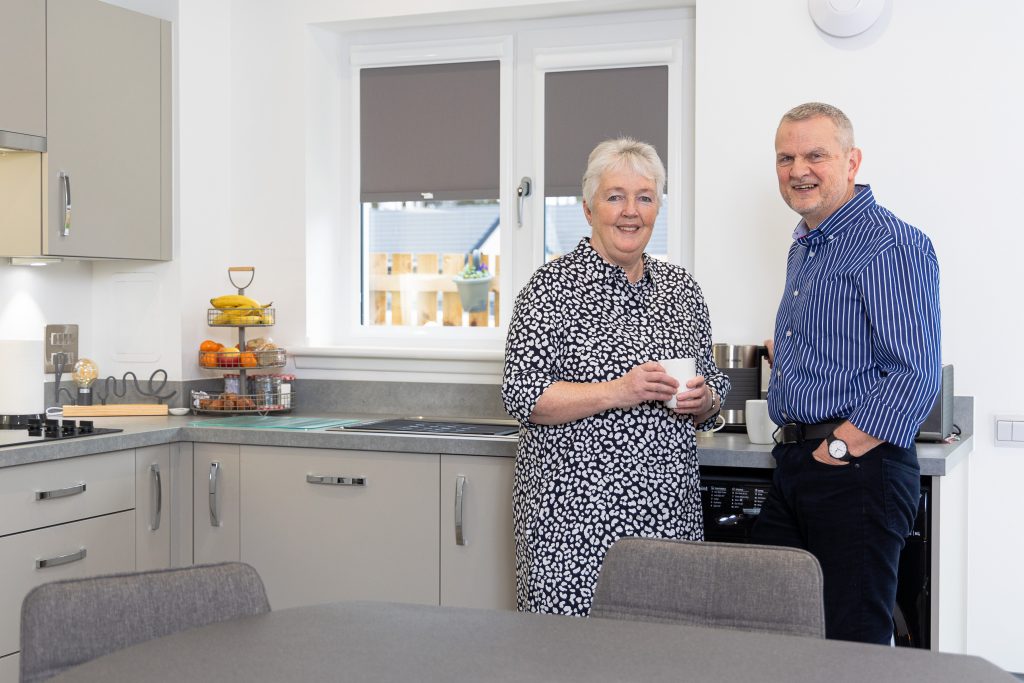 Some things are just meant to be and when David and Pauline Dickson spotted new homes under construction  in Kinross and stopped their car to have a look, it was as if the heavens were in alignment.The sun was shining, the sky was blue and as they approached Muirwood Gardens a hot air balloon floated gently overhead.

And if that wasn’t enough to convince them that they’d found the pot of gold at the end of the rainbow, then the exclusive development for over-55’s, with its mix of luxurious apartments, bungalows and villas was exactly what they were looking for as they started planning for life after retirement.

The couple, who had previously lived in north east Fife, were looking to move somewhere closer to family in the Edinburgh area.

“We are going to be grandparents in July, so we wanted good transport links and we also wanted somewhere that our family could come and stay,” says Pauline.

Muirwood Gardens offers both. Not only is it just 30 minutes on the motorway to Edinburgh, but if their own house is full up, then David and Pauline can also offer visitors the use of Muirwood Gardens’ luxury guest suite, which is part of the development’s Club House, a high-end social hub where residents meet for coffee, hold whisky tastings and watch sporting events.

The Club and the guest suite are just two of the elements that enticed the couple to Muirwood Gardens. What they loved too was the fact that their three-bedroom home is fully accessible, with a wealth of subtle features that can change with their needs.

David says: “Future-proofing was very important to us. In this style of house there is a downstairs bedroom and shower room, so if you reach a stage where stairs are difficult, that’s not going to cause problems.

When they moved in last September they found a ready-made community of friendly neighbours, as well as access to excellent countryside for long walks and a golf course, with a welcoming club house on the other side of the hedge.

Kinross itself is also a bonus, full of independent shops and essential services.

Pauline says:” We can walk to the library, butcher’s, doctor’s, chemist, supermarket, bakers, cafes and restaurants.

The four pubs that also lie just a stroll away make socialising a pleasure and with places such as Perth and Dunkeld easy to reach by road, there’s no end of opportunities for lovely days out. Neither Pauline or David had considered living in a retirement community until they discovered Muirwood Gardens, but once they found out more about it, they had no reservations. David says: “The idea of living in an age-exclusive community was new to us but it was very appealing and it has been a positive experience.”

GOLDEN OPPORTUNITY FOR OVER-55s TO BUY APARTMENTS IN KINROSS